Appleton Community supports a number of missionaries.  Below you can read about our missionaries and find out how you can support them.

Jim and Ginger Moore have been married nearly 30 years and have three adult children. Natalie is completing her PHD in English Literature in Durham England and is married to Francis, Abby is working as a journalist and nanny in Greenville South Carolina and recently married to Sam. Mitch is finishing his last semester of university in Raleigh North Carolina graduating in December 2016.
Jim and Ginger have been with Wycliffe for 20 years in a variety of support roles. Ginger is a nurse and working part-time at a local hospital. Currently Jim is a product manager. His main product is a platform that helps individuals build simple websites easily in all translated languages. Jim also trains believers in using this platform so they can have a website in their language. These sites allow for people in their language community to view translated Scripture, videos (Jesus Film), audio (Faith Comes by Hearing), social media, cultural stories, and other important information the Christian community desires to publish. Here is an example: http://www.ethnosites.org/en/Kumaoni-video-audio-text

Currently living in Plymouth, Minnesota Howard & Marilynn Plucar serve as ReachGlobal (The International Mission of the Evangelical Free Church of America.) pastor-to-missionaries (PTM)couple; a ministry that they have had since January 1, 2010. From January 1, 2010 until October 1, 2013, Howard & Marilynn served in a part-time capacity as pastor-to-missionaries couple while at the same time serving an international church in Tokyo and also managing the ReachGlobal-Japan guest apartment. On October 1, 2013, they became full-time PTM couple serving ReachGlobal staff in 12 countries – 3 in Asia, and 9 in Europe. Prior to 2010, they served for 13 years as area leaders for ReachGlobal in East Asia/Pacific Asia with responsibility for ReachGlobal staff health and effectiveness, investigation and development of new work, and collaboration with national/international partners. Prior to that assignment, they served for 8 years as District Missions Consultants for ReachGlobal in the Forest Lakes District (Wisconsin and Upper Michigan). They also served as short term workers in Japan in the mid-1980s as well as serving EFCA Churches in Wisconsin, including 10 years as Pastor of Faith EFC of Manitowoc, Wisconsin from 1974-1984. Howard & Marilynn have been in EFCA Ministry for 44 years, 32 of those years with ReachGlobal. They have been married for 45 years, and have two children (Kris and Bryan) and two grandchildren (Owen & Ana).

We are team Tetschner.  We currently do life in Lincoln, Nebraska.  Our family enjoys the outdoors, traveling, international students, spending time with friends, Mexican and Chinese restaurants and ministering to college students together.
I (Nikki) serve with Cru (formerly Campus Crusade for Christ) in Nebraska.  I love sharing my faith, coaching staff women, investing in college students, coffee, naps and chocolate.  My current role on the Nebraska team is to coach and train our new staff women and interns.
My husband Andy works at a banking software company.  He has been volunteering with Cru since we got married 6 years ago.  He’s been doing operations for our summer mission trips and investing in college students as a mentor and friend.
Hannah is our delightful, busy, people loving almost 5 year old daughter.  She loves all things princess, and playing outside.
Thanks so much for partnering with our family to reach college students and the world for Christ.
With Joy,
Andy, Nikki and Hannah Tetschner 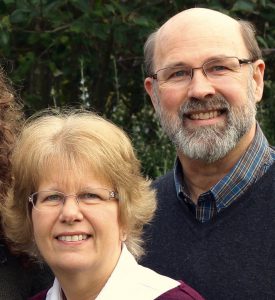 Lonnie and Debbie Smith have worked in Marseille France since 2001 and with ReachGlobal (EFCA) since 1992. They are currently helping the church in the Merlan area of Marseille with pastoral leadership, evangelism, discipleship and would like to see new churches started in Marseille. There are many opportunities to work with unreached people groups in Marseille and we would like to see others join our team.